Stories from Our Biosphere

A story about Alby the turtle and her Mother

Written by Catherine Knight and Edited by Dr Eve Fesl

(**Note from Catherine – I have also integrated some advice from the QLD Turtle Conservation volunteers from the Coolum and North Shore Coast Care group who suggested some minor changes as well.) 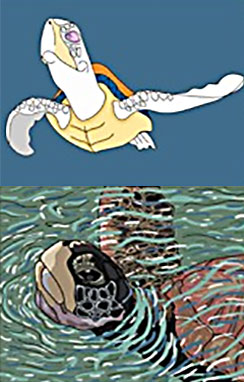 On a beautifully starlit evening in Noosa Australia Alby’s mother swims opposite to her special nesting area on Castaways Beach. There she waited for the sun to go down before getting ready to leave the ocean. This female Green turtle looks all over the beach. Once she sees the perfect spot to lay her precious eggs she swims to the shore. Then, she begins to dig a hole with her hind flippers making the nest chamber.

Female turtles must dig the chamber the right size and depth (approx. 60cm deep) so the eggs will be safe from the ocean waves and predators. Alby’s Mother lays 126 eggs in this nest chamber, and then carefully covers them with sand.

Before she leaves, she makes scratch marks on the area to make it confusing for any predators that might want to dig up and eat her eggs. Then, feeling exhausted, Alby’s mother returns to the ocean before the sun rises again.

After a couple of months have passed (between 60 – 85 days) the eggs start to hatch. The hatchlings wait in the nest until the sun has gone down and there are fewer predators around. When the climate feels right the hatchlings start climbing up and out of the nest chamber.

In the struggle, made by others to make it out of the nest, Alby was used as a stepping stone by what felt like each and every one of her 120 or so siblings. Alby found herself upside down and reburied under a weight of sand that held her in place. How would she escape the nest chamber now, she thought.

Alby cried herself to sleep wondering if she would ever escape the nest.

Three days had passed when the Queensland Turtle Conservation (QTC) volunteers came to the nesting site to collect valuable information on the nest chambers and hatchling numbers.  One of the QTC volunteers started digging away the sand to reveal the nest of empty egg shells when she came across a hatchling upside down and very still.

Suddenly, Alby awoke feeling the weight of sand had been lifted off her. She flipped herself over to see that she was surrounded by giants (humans) who were all looking at her with surprised looks on their faces. “Oh,” said the volunteers, “it’s an albino!”

As an albino Green turtle hatchling Alby looked a little different to her siblings. Alby is a pale whitish colour with touches of pinkie purple for her skin and carapace (or shell) colour. Also, Alby’s eyes are red in colour.

Normally, Green Turtle hatchlings have a dark grey colour on their carapace and skin with dark coloured eyes. They have white tipped outlines on all of their flippers and are white on their underside (or plastron) but they are not white all over like Alby is.

Cameras clicked and videos were taken to record Alby’s presence on the beach.

Alby was measured and her body was checked. QTC volunteers always check to be sure that the hatchlings have absorbed all of the nourishing egg yolk from their egg shells which feeds them until they reach the EAC (the EAC = the East Australian Current).

Alby was placed back onto the sand near her nest site so that she could run down to the ocean herself. It is very important that Alby runs across the sand herself and is not carried to the ocean.

As hatchlings run across the sand towards the ocean, they turn on their inbuilt GPS system to magnetically imprint themselves. The turtles do this so they remember where they were born, and may return to the same area when mature to lay their own eggs.

Alby ran off across the beach and made her way to the ocean and was tumbled about in the waves. She swam as fast as she could in the hope of avoiding any predators that may wish to eat her.

Ahead of her, Alby could see a dark shape sitting on the water that looked like a log floating on the water. Alby swam up to the log hoping to hide in the shadow of the log and catch her breath for just a moment.

Suddenly, Alby heard singing and the rhythmic beat of clap sticks coming from above the water. Alby looked up to see two pairs of eyes looking down at her. Alby panicked and did not know what to do. She bumped into the log, hitting her head which made her feel faint, when two hands reached into the water and gently lifted her out.

At first Alby was very scared but the sound of the singing seemed to calm her down and she found herself looking into the faces of a very wise woman and man.

The humans spoke to Alby telling her that she was in great danger swimming around without her proper Green turtle colouring on. But, the wise woman said she knew how to keep her safe and started to take things out of a bag while the man continued to sing.

The wise woman had special rocks that she rubbed together with water and fat and made into a thick waterproof paint. Then, as they sang together, the humans painted Alby’s shell with a special design that would help keep Alby safe and camouflaged.  The design was also a picture of the land marks that identified the place where Alby had hatched and would help her find her way home in years to come.

The wise woman told Alby that she was going to be very important to the wise woman’s people, the Gubbi Gubbi tribe. “The whole environment will benefit,” said the wise woman to Alby, “when you have grown up into a mature turtle, and return to these waters again to share the important knowledge you gain during your travels.” Alby was very happy to hear this and she swelled with pride feeling rather good about the important role she would play in her adult life.

Once Alby’s new painted camouflage was in place and she had rested enough, the wise man gently placed Alby back in the ocean again as they said their goodbyes. Alby said: “thank you very much for helping me,” to her Gubbi Gubbi friends and bravely swam off to find the East Australian Current.

After twenty five years have passed since Alby was a hatchling, she is now a mature female Green turtle. Alby wants to swim home to return to the place where she hatched all those years ago. Now Alby is ready to lay her own clutches of eggs on the beaches of Noosa.

Alby travelled far and wide on the ocean currents, and saw many things. Alby has a lot of stories to share with the people of the Noosa biosphere and she hopes her stories will travel far and wide, just like she did.

Alby’s story will be continued….

Would you like to find out more about volunteering on projects working to support Our Biosphere? There are many great ways you can contribute, we’re always looking for volunteers. Get in touch today!